In 5th grade I was tasked with creating my own family heritage book. I remember putting the pages together with colored pencils and construction paper, outlining Ireland, Poland and Russia, the 3 countries my ancestors were from. Whenever someone would ask me growing up what my nationality was, I’d say I’m Irish, Polish and Russian.

Until recently I never had a keen interest in digging into my family heritage. But I think it’s important for all of us to retrace our roots and learn more about who are families are, who you are. 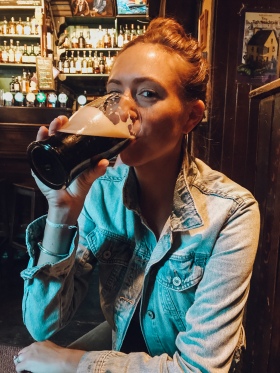 Well, don’t let the reddish hair and freckles fool you because according to my DNA test with 23andMe, I’m less than 3% Irish. I’m 97% Eastern European and .01% East Asian & Native American.

Who would have thought?!

Regardless of my Irish heritage, or lack there of, Ireland is a country that I know I will always want to come back to and explore deeper.

I’ve been to Dublin before but for those of you that have traveled the Emerald Isle before know that there is so much more to see than Ireland’s largest city. Andy has been to Ireland a couple times and had traveled around the country with his family a few years back.

One of his favorite cities in Europe is Galway and visiting Cliffs of Moher for him was a huge highlight of his stories about Ireland.

I may have heard the story of the woman getting blown over while visiting the Cliffs and falling down on the ground hurting her ankle and everyone had to make a barrier around her…one thousand times. It might have been his 10th time telling me the story when I finally added the Cliffs of Moher to the very top of my bucket list, I had to see it with my own eyes. So because of Andys passionate storytelling, hint of forgetfulness and major hype- we were heading to Galway and Cliffs of Moher for a few days. 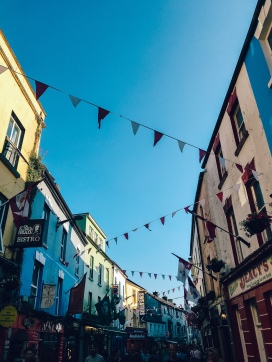 I can’t go any further without letting you know that these places lived up to the hype, they might have even surpassed it. So great job, Andy, you may have a career in Sales after all 😉

From NYC to Dublin it’s a quick 5 hour flight. You go to sleep, take a little snooze and you’re there. Less time to get to Ireland than to California, one of the many perks of living on the East Coast. We hopped the bus to Galway, a short 2 hour bus ride from Dublin. Our b&b was right off the main square, Eyre Square, nestled in a cozy side street, but walkable to everything.

Whenever we come to Europe from the States that first day is SO hard for us to push through and not fall into the dreaded hole of jet lag. The way to beat jet lag, in my opinion, is to never nap that first day, and always go to bed normal times of the country you’re in. Don’t say things like “my body clock is X”. It’s all mental. Just throw yourself in to the day and you’ll defeat the lag. Contrary to my stance, the first thing we did in Galway was fall into the cool, white fluffy bed and slept until dinner. Woops. I broke my own rule. 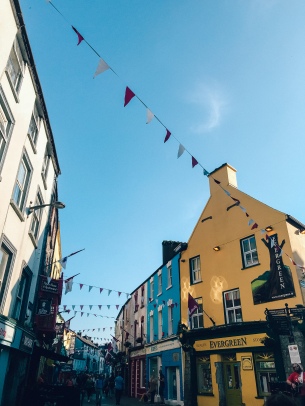 We had a bunch of recommendations from our friends that live in Ireland and our bestie Sean who’s from this great country and has spent a lot of time in Galway and may be a celebrity at some of the bars there, we aren’t sure but there’s a high likelihood. The list we had was intimidating but we were up to the challenge to check them all off.

First impression: this small city is buzzing. At all times. I’m thinking Jimmy Buffet must have been visiting Galway when he wrote the song “It’s 5 O’Clock Somewhere”. The streets are vibrant, filled with locals & tourists alike, musicians on the street and bars with tons of outdoor seating. The energy here is infectious and we got sucked right in. I could see the glow in Andy’s eye and knew he was elated.

We ended up at a traditional Irish pub, Tigh Neactain, and snagged a seat right in the corner of the front bar- perfect to people watch. Ah, the first sip of Guinness from Ireland. It may sound cliche but it’s true, Guinness really does taste better in Ireland. The taste is so good it reminded me of the first bite of a juicy American cheeseburger I had after a few months in Asia. As we downed our first pints, our smiles got bigger, bellies fuller and we were ready to keep exploring this gem of a city. 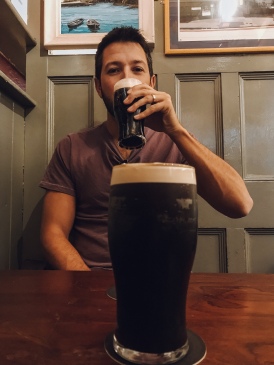 One of our favorite things to do in a new city is create our own little drink & food tour. We know we can’t sit down for an actual meal at all of the restaurants/bars that are recommended to us so by having a drink and snack at each of them instead is the perfect solution.

After bouncing around Shop Street we were feeling that Galway buzz but HAD to get our night cap at O’Connell’s. It’s Sean’s favorite bar in Galway so we had to make him proud. His explicit directions said, go in, walk passed the first bar and go to the back outside area. We did as we were told and as we push the door open from the small front room you’re transported into this massive outdoor, beer garden of all beer gardens. Long tables, music, tons of people. A couple pints later we remember to check the weather for the next few days to reserve a car for Cliffs of Moher on the absolute best forecast day we could get. Turned out, it was the next day. We luckily snagged a car and were all set to head out in the morning. 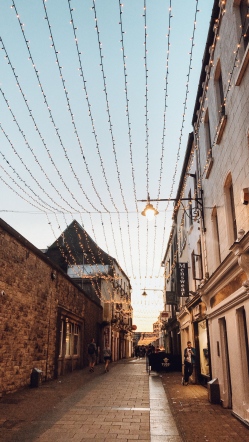 Let me just say, thank God for Weather.com and the reminder in my phone because we may have scored the most beautiful day Ireland has had in months. When we got to Galway people told us that we brought the sun because it had been raining so much there was a lot of flooding lately. I don’t know what we did to deserve this but the travel Gods have been on Team Best for the majority of our trip this year and this day was like no other.

Remember when I told you about Andys sweaty palms and armpits when he drove us around on the E-bike in Myanmar? Well those sweat glands were working in over time that first hour in the rental car as Andy started the drive, on the opposite side of the road, to the Cliffs of Moher. There may have been over 25 rotaries on that drive which are extremely confusing because of course in America you always go right in a rotary (unless your my sister AKA one of the scariest drivers out there and go left) but in Ireland & UK you actually do go left. 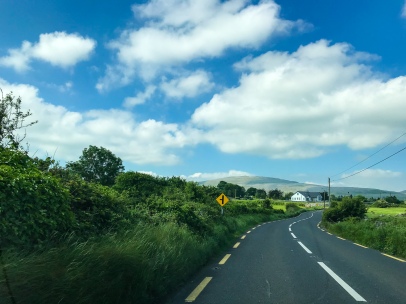 Anytime we were headed for a turn or rotary I had to lower the music so we could concentrate. Isn’t it funny when you’re in a car and are driving in a stressful situation or parking garage you automatically go to lower the music, like that does anything?

The ride was stunning. Rolling green hills, luscious flowers in full bloom with a crisp breeze on a sunny day. Could anything in life be better than this?

Driving on the narrow roads we felt like we were the only ones in Ireland. It’s one of my favorite feelings when we travel. We arrived at the Cliffs of Moher with no scratches on the car and fully intact, ready to make the visual I had in my head of this majestic place, a reality. 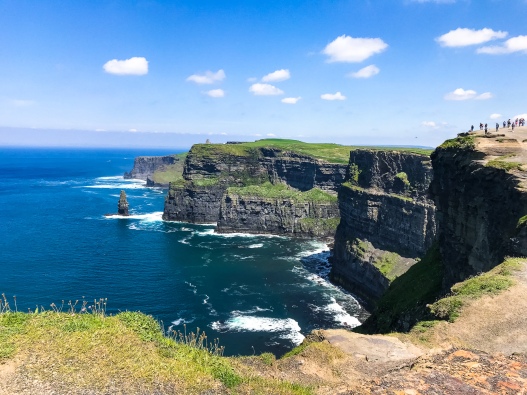 The Cliffs are truly breathtaking.

Everyone says they are stunning in any weather and I can definitely see why. I was shocked to see that there was no barrier between you and the edge. You’re free to walk along the narrow paths running inches away from the drop off of the cliff. It was scary at first and I got that wobble in my leg and tickle in my butt when we were navigating along. Come on you know that feeling, don’t even lie. 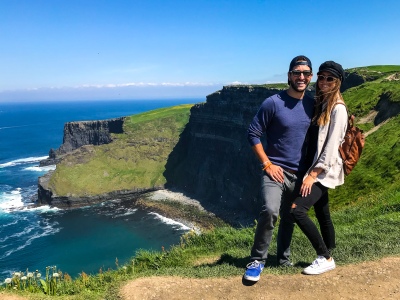 I probably took over 500 photos that day. You take two steps and see the Cliffs from a different angle and you just have to snap the shot. We walked from one end to the other, fully taking it all in. I will remember that day for the rest of my life.

Andy’s confidence was running high on our drive back to Galway after conquering the first leg and I’ll be the first to say he did very well. His E-bike days are behind him. 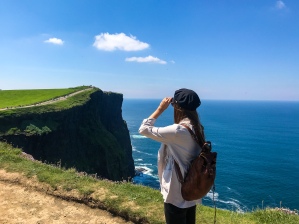 The rest of our time in Galway was spent by walking the streets, popping in and out of bars and savoring every sip of those Guinness pints. There’s still so much more to explore in Ireland and I need to see the towns that Andy has more stories about so we can both start to repeat ourselves and tell the same stories over and over until it influences more people to visit, just like it did for me. 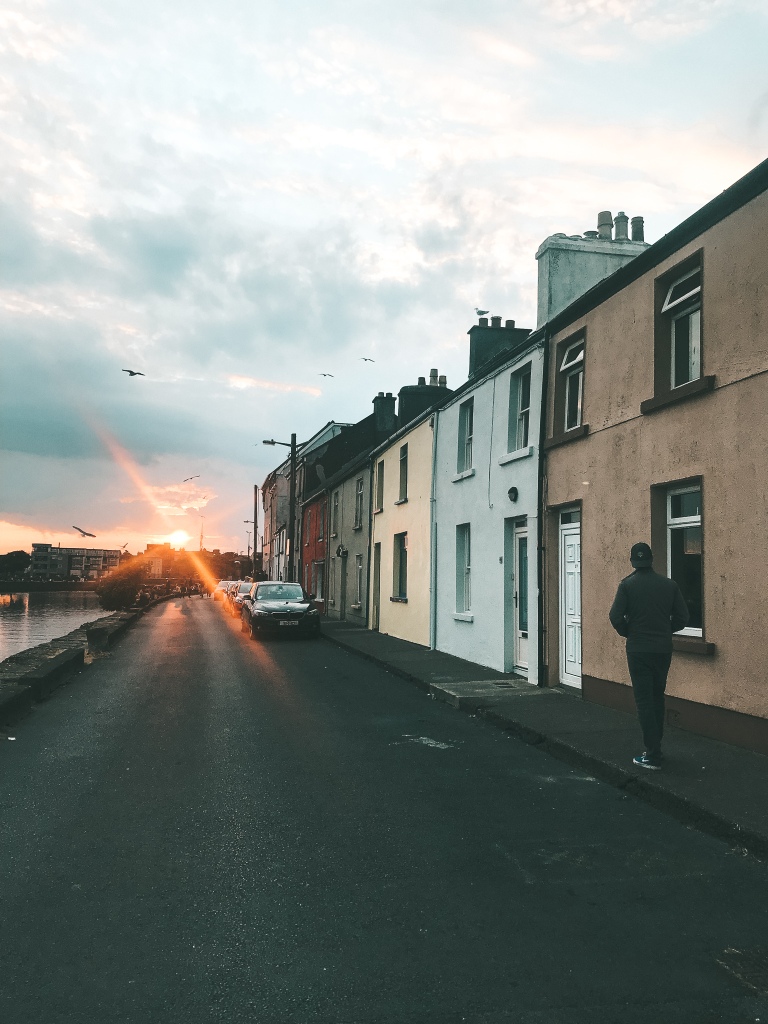