Whenever I tell people we decided to spend almost 2 weeks traveling through the country of Poland I can immediately see the persons head start to tilt a little bit to the side before blurting out “hmmmph, Poland huh? Why’d you guys decide to go there?” 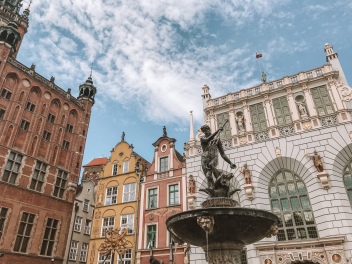 Let’s be real- Poland doesn’t have the romantic charm that Paris radiates or the breathtaking island vibes that Greece is known for right? Right.

In most of our heads when we think of Poland we think of terribly sad, dark and horrific times of the Holocaust. So why on earth would we choose a destination that triggers these harrowing times? Well, we chose this country for a few reasons;

1) Because it’s a country that’s not on everyone’s “must travel to” list, making it extremely affordable and less touristy

3) To learn more about the Jewish history

Looking back on our 9 months of travel, it probably rained 18 days total and about 14 of those days were all in Poland. But honestly, we kind of really enjoyed having the shitty weather. The nice thing about traveling full time is that when it rains it’s not like it’s ruining one of your precious vacation days that you took time off of work for, every day was our “vacation day” so we never even gave the weather much thought.

We decided to start up north in a town called Gdansk (pronounced guh-dansk). We were looking for a smaller type of city that would throw us right into the thick of the Polish culture. Can you guess what our first agenda item was? 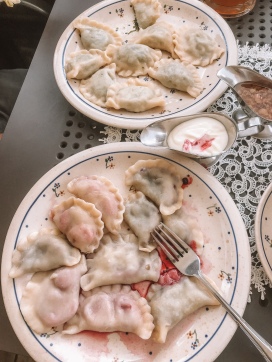 Pierogies. Find tasty pierogies. Over the next few weeks we ate SO many of those heavenly dumplings. From blueberry to potato & onion to spinach & cheese, these babies were stuffed with the perfect amount of filling that by the 11th pierogi later you cleaned your plate. Just to give you perspective, every time you order pierogies they come with 11. We ordered at least one plate of pierogies at lunch and dinner so that’s about 22 pierogies a day. We tried not to be wasteful so similar to Italy, we were loosening up our pants as we worked our way through Poland.

Okay so back to Gdansk.

We popped in to Pierogarnia Mandu for some lunch and it was great, highly recommend it. The atmosphere was intimate and adorable all wrapped into one.

Next, we explored the Old Town which was filled with shops, restaurants and bursting with charisma. If you find yourself in Gdansk, take Piwna street and walk towards St. Mary’s Basilica. Our favorite street though is behind St. Mary’s called Mariacka. It’s lined with local vendors that set up tables with their amber jewelry & goods. 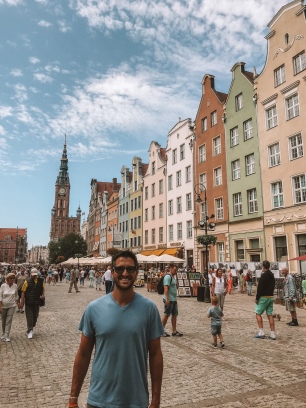 Baltic amber is big business in Gdansk. It comes from the region and has been sourced there for thousands of years so make sure to bring some home with you for a little treasure from Poland.

A few streets past Mariacka you’ll run into Dlugi Targ. It’s a huge, historic square filled with colorful houses, violinists and restaurants with terraces lined with heaters since it was still kind of chilly in June.

So our next stop was Warsaw which was about a 4 hour train ride south of Gdansk.

We normally love traveling by train while in Europe. It’s usually comfortable, easy and timely. Unfortunately, the train system in Poland needs quite a bit of work because we were not comfortable, it wasn’t easy and it certainly wasn’t on time. We booked our seats ahead of time and wound up in a 8 person compartment that felt as though it should be only fit for 4. All of the luggage was piled up above our heads on a not-so sturdy rack. Elbow to elbow and knee to knee we started our adventure to Poland’s largest city.

I’ve wanted to visit Warsaw since reading the Zookeeper’s Wife in the last couple of years. The true story was based in the Warsaw Zoo where the zookeeper’s family secretly housed hundreds of Jews over the years during the Holocaust. It was so surreal to see it in person. 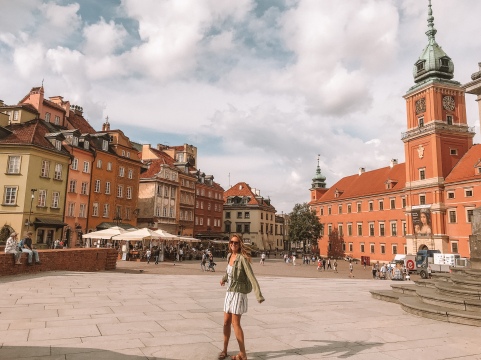 We started our visit off in Warsaw with a free walking tour of the Old Town, where we decided to stay. Similar to Gdansk, the Old Town of Warsaw was beautiful, but about 85% of the buildings were destroyed during WWII so they were rebuilt to resemble the original structures. The city of Warsaw has a very tumultuous history, but today you can tell the people of Warsaw are very proud of where they come from regardless of their sad past. Another fact we learned was that today, 97% of Poland is Roman Catholic and our tour guide said it’s one of the least diverse countries in the world. A little over 90% of Polish Jews were murdered during WWII. 90%. So terribly sad.

After the walking tour we decided to try and get happy again by stuffing our faces with pierogies and grabbing some famous hot chocolate at E. Wedel’s. Mission accomplished.

A few days later we started our next train journey to Krakow. 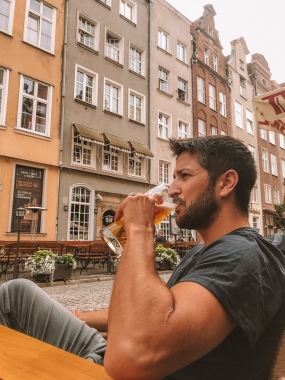 We absolutely fell in love with the neighborhood, our Airbnb and Krakow pretty immediately. The World Cup finals were happening on the day of our arrival so step 1 was to find a bar that was showing the game.

We found a hole in the wall spot that had a dungeon like basement with a huge projector to stream the game. We became best friends with the 2 guys sitting next to us who were from Ukraine. They didn’t speak a lick of English and I tried to humor them with the 6 Ukranian words that I knew but that didn’t get us very far. Instead we spent the night using Google Translate, thank God for that app. 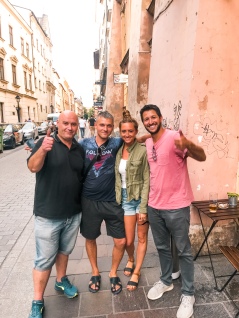 Now we have friends from Ukraine called Petrov and Andriy who Whatsapp me frequently asking if I have single girlfriends for them. Sometimes I send them pictures of my friends Jackie and Akers. Maybe I’ll be attending a Ukrainian wedding in my future after all! #InternationalMatchmaker

Transitioning now to a somber time in our trip to Poland.

We visited Auschwitz which was by far the most moving and impactful experiences we had on our trip and arguably on any trip we’ve ever been on. During my travels I started reading a ton of historical fiction books and a lot of them centered around WWII.

Nothing you will ever read will prepare you for actually stepping foot on these grounds. It was eerie, bone-chillingly sad and just downright utterly heartbreaking. The fact that humans carried out such heinous acts of torture to other humans AND that it was only 73 years ago is absolutely mind blowing. We paid our respects to the lives lost in that awful camp as well as Auschwitz II-Birkenau. If you are in Krakow and need help planning a visit, feel free to reach out. 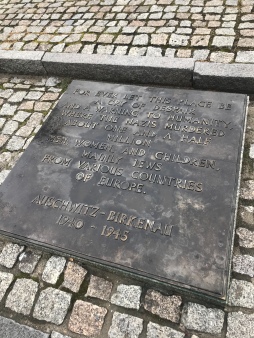 When we arrived back in Krakow we just wanted to be cozy and watch something happy on our laptops. I opted for Love Actually. Because Love Actually in the month of June, that’s just, happy.

The next day we went to Pryzystanek Pierogarnia for some cheeseburgers.

Just making sure you’re paying attention- I know this is a long post, we just saw so much and want to share it all with you.

So we went to that restaurant that I have no idea how to try and pronounce for some early lunch pierogies. Andy had a real insert your foot in mouth comment about 10 minutes in. We were sitting next to this couple, the woman was from NY and her husband was from Poland. The husband asks us what we thought of Poland so far and Andy responds with “we were thinking it was just going to be gloomy and sad but overall it’s been great”. The guy just awkwardly looked at Andy- I mean he did kind of insult this country. I died a little bit inside but we burst into laughter about it as soon as the couple left, which was approximately 2.5 minutes later. #NoNewFriends 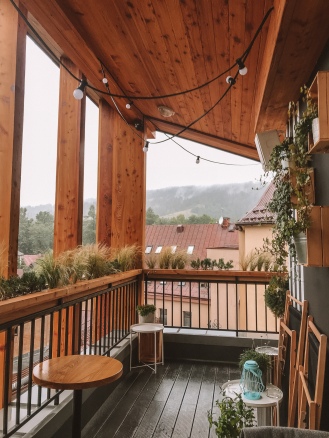 Our last stop on the Polish adventure was Zakopane. It’s basically the Aspen of Poland. Very rich, quaint, mountain town on the border of Slovakia. This place just screamed COZY. We had terrible weather but didn’t let that stop us and found every warm bar and restaurant this place had to offer. There was one 5 minute walk from our cabin-hotel and we ordered almost everything on the menu. Borscht, pierogies, kielbasa, homemade hot chocolate, packzi, you name it.

Looking back at all of the countries we went to, Poland was definitely one of our most underrated destinations that crept its way to the top of our list. It was such a moving place to be and I can’t recommend it enough.

Also, in case you’re wondering, I go through waves of withdrawals of pierogies, including right now. I had to get up in the middle of the blog post and go boil some pierogies. Yes, I have a bag of pierogies in my freezer…for times like this.

Side note: I’m also wondering how many times I wrote the word pierogi in this post and it came to a total of 12. 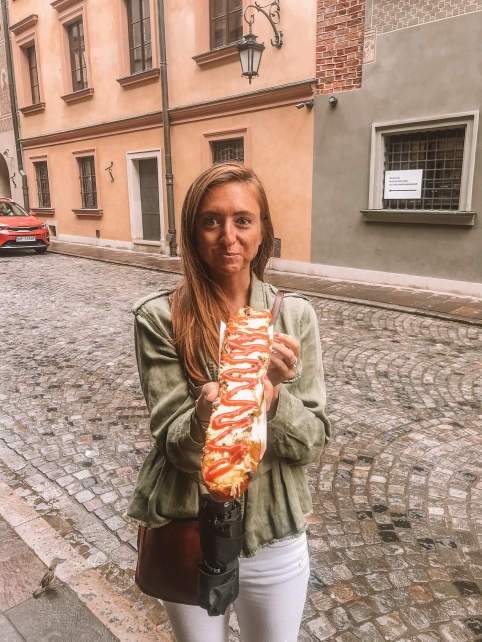 Some polish food you MUST try:

One thought on “Entering Pierogi-land, also known as, Poland”