Myanmar, lucky country #40 for me and #28 for Andy, quickly became one of our favorite destinations, hands down. From the thousands of pagodas in Bagan, to the floating gardens in Inle Lake and chaotic streets of Yangon, this country surprised us in so many ways.

Myanmar was one of those countries that I’m not sure I even knew existed until about a year ago. I pride myself on being a geography buff (thanks to my World Map shower curtain from Amazon..YOU NEED TO BUY THIS) so I’m actually kind of embarrassed admitting that to you. A few months back I started seeing photos of Myanmar from a few travel bloggers I follow and quickly added “see the balloons on top of a pagoda at sunrise in Bagan, Myanmar” to my bucket list.

After doing a bit of research we had to adjust our 6 weeks in Asia slightly so we were able to see the balloons over Bagan (they stop launching around April 15th due to weather conditions). We planned only 1 week in Myanmar and it was the perfect amount of time for each of the cities we chose but there are still a few other locations that we wish we added to the itinerary. Sometimes I like leaving a country knowing that there was way more to see, just means we will have to come back one day. SO…we planned 3 nights in Inle Lake, 2 nights in Bagan and 1 night in Yangon. 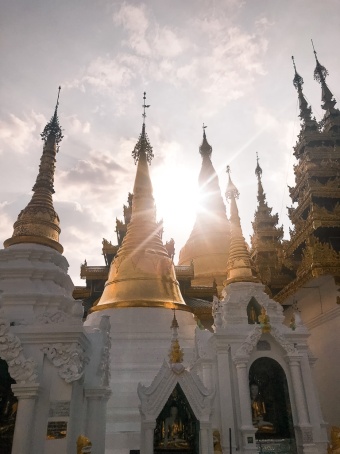 When we arrived at Heho airport we realized how underdeveloped this country is. You arrive in one big open room where you’re greeted by a couple super friendly Burmese men and they show you to a stand. The stand resembled that of a kids lemonade stand, but it wasn’t a lemonade stand, it was the Immigration counter. A double door opens up right next to the stand and the airport crew start throwing the checked luggage on to the ground, it was actually a much easier process to collect our bags here than the fancy belts that JFK have. We were off! Inle Lake is about an hour drive from the airport and up until you get to the archway of Inle, the scenery is pretty sparse.

For 12,500 kyat each ($10 per person) we were in! Our driver stopped a couple of times to let us watch the locals tend to their floating gardens. We arrived at our resort which was right on the lake, fit with a large deck with reclining wooden chairs for a front-row sunset view over the water. Pretty spectacular, to say the least. We were welcomed to our

room by a baby tarantula that was hanging out in our bathroom and was so excited to see Andy that he ran right over his foot. I’ll let your imagination create the picture for you but for some context, there were loud girly screams (x2), high jump-style leaps onto the bed and an immediate phone call to housekeeping. Guess that was our big welcome to Asia! The 2 women who showed up to kill the eight legged monster were giggling and had no fear putting it in a rag. Andy felt extremely emasculated afterwards but soon got over it.

ANYWHO- the next day we took our bikes and went to the neighboring village of Mine Thauk where we walked along a long wooden bridge that connects the land village to the water village. We decided to eat at a local restaurant there where the only way to get there was by a boat to drive us about 50 feet across. We sat on tiny stools only a few inches from the ground and enjoyed our Myanmar beer for a whopping $1.50 for the big boy. From 12-3pm it is SO hot here that it makes riding your bikes nearly impossible. If you come here, especially during hot season, make sure to find a hotel with a pool (Few recommendations: mid-range stay-Inle Lake Resort (where we stayed) and for a little bit pricier places but gorgeous: Novotel or Sanctum Resort). 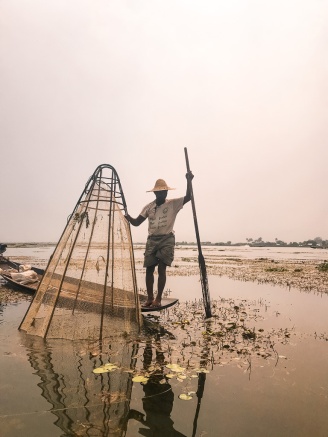 The following morning about 7am we headed out onto the lake for a private boat tour which ran us about $35 total for the entire day. We sped past local fisherman balancing on the edges of their boats while they paddle with one leg, visited local silversmiths, wood-carving shops and silk factories. Our favorite part of the day was visiting the village of Indein where we got lost in the sparkling gold pagodas of Shwe Inn Thein. On our way up we bartered with a women in the market for a white handmade shawl for me ($6) and it was there where we heard the phrase “lucky money” for the first time. She took our kyats and brushed them all over her scarves and shawls that she sells repeating lucky money. She told us it meant that when someone buys something and they brush the bills over the products they sell it will bring them luck for the rest of the day.

We absolutely loved Inle Lake and if you decide to go there feel free to email us for recommendations (inthebestsworld@gmail.com)!

Oh Bagan. Bagan is where we made friends with a local, An Cho, climbed to the top of a secret temple and learned that Andy Best cannot drive an e-bike. I’m not being mean and I am not exaggerating when I say there were about 6 times when I feared for my life and the life of my husband. His knuckles were white, his back was dripping with sweat and he was as stiff as a board. That being said, he did improve tremendously over the 48 hours we were there and I am very proud.

Bagan was one of those places that you just have to see for yourself. I’m not sure my words or pictures can even do it justice but I’ll give it a whirl. The best times of day and most popular times to be outside (as a tourist) in Bagan are at sunrise and sunset. For just $5 for the whole day you rent an e-bike and get lost in the thousands of pagodas that are still standing. Of course there are the larger temples that all the guidebooks say “you must see” but Andy and I found that our favorites were the smaller pagodas that had no one else there.

Until about a year ago you were able to climb up the temples, a lot of them have steps on the outside or secret entrances on the insides, but after a tragic accident Bagan banned climbing on pretty much all of them. A few travel bloggers have found “secret” temples that you can get away with climbing and I’d be lying if I said I wasn’t determined to find one of them. I had to cross that off my bucket list!

On our way to Old Bagan, we pretty much got driven off the road by a slow moving car, and our soon to be friend, An Cho pulled over to see if we were okay. We were fine (don’t worry Barb!). An Cho started chatting with us and  we got into a conversation about climbing temples. He said there is a “secret” temple that he’d show us and it’s a spot only locals know about. An Cho quoted, it has “the best view in the mornings to watch the balloons”. My eyes instantly lit up.

Okay so when you were just reading that, were you thinking to yourself, come on guys why would you follow a local to a “secret” temple, HELLO, that screams, scam, money pit, semi-dangerous? I know you did. Because at first, we did too. I hate that we instantly felt that way, but I think it’s a product of the world we live in in America. It’s not a bad thing to be super cautious but in this part of the world, I think in certain situations, it’s okay to be open to random meetings like that.

So we get to the temple with An Cho and it was AMAZING. Afterwards we sat under Buddha downstairs and had An Cho (did I mention he was an artist?) show us his paintings. He taught us about how Burmese people name their children, by the days of the week, and from what plants he got his colors from. We ended up negotiating and bought 3 paintings from An Cho. Lucky money everywhere!!!! He showed us how to get to a veggie restaurant we were dying to try and then we said our goodbyes. Meeting An Cho has been one of the highlights of our trip so far. 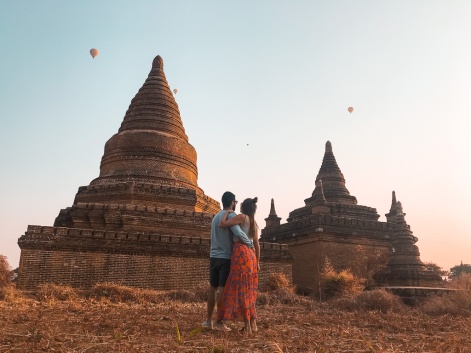 About midday on in Bagan is so extremely hot you NEED to find a pool. We opted for the cheap & chic hotel called Sky View Hotel that was $25/night that had a great rooftop but no pool. Luckily, our good friend had recently visited Myanmar and told us about a great little travel hack and we confidently strolled into a beautiful hotel to use their pool for the day.  I’ll pay it forward if you want to know about how you can stay in Bagan for cheap & also live the secret life of luxury at the same time. Just drop me a line! 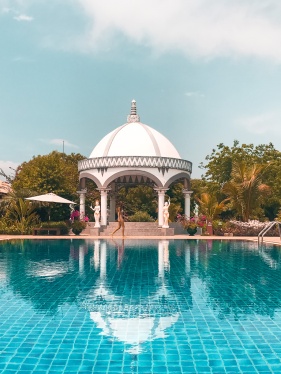 We woke up at 5am to hop on the I mean e-bike to go to our “secret” temple. Turns out, the temple wasn’t so secret after all. It didn’t have the loads of tourists that the man made hill that Bagan created to watch sunrise/sunset but it had about 15 people on the top of the pagoda. I was bummed obviously but somehow we scored the best seat in the house with no one in front of us. We watched the sky go from black, to light blue, to golden-orange as the balloons started to rise up from behind the pagodas. Not sure if I’ll ever experience another sunrise like that in my life. ✔

Yangon, you crazy city you. 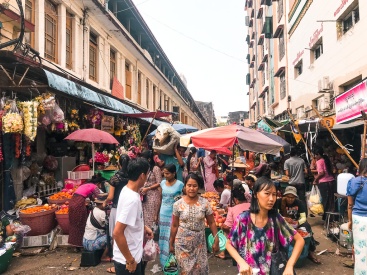 Based on recommendations we strategically planned one night in Yangon. For us, it ended up being the perfect amount of time. We stayed at The Merchant Boutique Hotel ($40) which also had an awesome rooftop that had a great view of the iconic Shwedagon Pagoda which glimmers high at 325 feet above the rest of the city. This place was stunning. From monks walking around to prayers being said, it was surreal.

We headed down to Chinatown around 19th street to try and find some famous Crab Rangoon at the Rangoon Tea House but they were all sold out! Bummer. The rest of the food was great though, definitely recommend checking this place out. After walking around for a solid 30 minutes in 98 degree, sticky heat, we both looked at each other and decided to call it a day. The streets were SO hectic and crowded but it was surely a sight to see.

To us, Myanmar felt like one of those countries that are on the brink of an absolute tourist explosion. We are so happy we came here before that happens.

The people, pagodas and way of life are truly impressive.

One thought on “Myanmar: A Magical Untouched Country”